Tears for the past


Kat Lemieux, founder and current president of the International Spaceflight Museum, sent me an IM today to tell me the news and to ask if I had made a Morphing Portrait for Para and if I wanted to create a memorial for him.

I saw her message as a notification from GMail as I was getting ready to leave work in the evening. I cried in the dark night as I walked to my car. And I don't know why.

I didn't have a close friendship with Para, but I worked closely with him when we were both active in the museum. It was a distant but warm professional friendship. When he took over the ISM, I was amazed at how he was able to keep it afloat financially, using his connections with donors and supporters.

But grief is a selfish emotion, and I knew that my tears were more for me than for him, although I am terribly sad that he is gone.

My last two years have been very difficult, particularly this past summer. In July, I had a cancerous tumor removed from my left kidney and that has not yet healed completely. In August, my mom passed away.

In the past few weeks, I've been missing Second Life. Not SL specifically, but the quietness and peacefulness that I have felt in the first few years of my virtual life. The wonder, the curiosity, the creativity. The innocence.

This week, I set up a trust and I'm still writing a pour-over will. In the process, I'm jotting down instructions for my successor trustee and executor. And the to-do list grows. I have a long list just to handle Opal's and Treasure's affairs. That task started my trek back into the past. And maybe that's why the tears came easily.

Paradox is one of the first few people I met in Second Life. His passing makes me feel like the past that I've been missing is slowly fading away piece by piece, because he was a part of that time in my life.

Many friends from that time have left SL too. No matter how often I log back into SL, I can't go back to that time. I can't step in the same river twice. 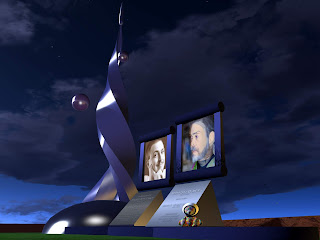 Again, August proves to be life-changing. Real life has a big influence this time. My mother passed away on August 11 this year.

Caring for her was a big part of my life in the past seven and a half years. And now, that responsibility has been lifted from my shoulders.

I've been alone before, but now the aloneness feels different. In the past, it always felt like an adventure, an assertion of my independence. This time, I'm not sure how it feels. At least, not yet.

It feels quiet. It feels peaceful. It feels like I could breathe again. It feels zen-like. I am more in the moment. I have more patience about the few minutes that it takes to do something simple and mundane. I stopped rushing.

I've spent less and less time in Second Life the past few years because of the real-life demands on my time, including my own health and job issues. I still don't have the luxury of time as I did when I first started SL, but now I have a little bit more. But is that enough?

But I'm still here. In a new phase of my life. Undefined. Uncertain.

In search for new meaning.

When I was twelve years old in real life, my body started that biological monthly "ritual" that differentiated a child from a young woman. I had already started wearing a bra several months before that.


There are no physical or virtual manifestations of changes due to her age, besides the continual updates in technology (her avatar is almost entirely in mesh now) and a meaningful shift in her coloring (which has nothing to do with her age).

In 2006, I started with fair skin and red hair. On my first day, I shaped her face into the one that I had been drawing since I learned to draw as a child. And I gave her fiery hair because I used to imagine that I was a feisty Irish woman in a previous life.

I tried different skin and hair colors through the years, especially during my virtual fashion model phase. I had tan skin and black hair at one point, then I realized too many models had that look, and I wanted to look different, so I kept the red hair.

Soon after the Charlottesville incident in August 2017, I went back to tan skin and black hair, which is my real-life coloring. It was a quiet political statement. I am a Filipina-American.

However, I kept the same eyes with blue and green colors, like Australian opals, because, after all, she is Opal.

Maybe the most significant change in my virtual life is my relationship with Wolfgang.

I met him in March 2012. I was finishing up my book which I published in May the same year. I thought he would be just another "dim sum." We broke up in January 2015. By then, he was the longest relationship I've had — almost three times longer than the second longest. The next year, we were back together. I don't even know precisely when that happened. We were supposed to be just friends the second time around.

Neither of us planned for a long-term relationship. Neither of us specifically wished for one. We are both polyamorous.

During our first three years, we argued a lot and, each time we did, splitting up was always an option on the table. Nowadays, the option is still on the table, but neither of us seriously consider it anymore.

Some days when I feel very insecure about our relationship, I still wish to give up and end it. Then Wolfgang would send me a funny email, and I'd realize that we're okay.

The odd thing is that the longer the relationship goes, the more insecure I become. My old abandonment fears, I know. So, we consider everything we do to make sure that we don't trigger my abandonment issues and my insecurities.

We're more patient with each other. He understands why I distrust him about certain things. So I'm more open about how I come to my own conclusions, which usually make me insecure, and he's more open to explaining why my assumptions are wrong.

Relationships are difficult. Memories are comforting.

Today, I indulged in a memory. Because I needed comfort. Because I needed to remember someone who thought that it was impossible to stop anyone from falling in love with me. He was wrong, of course, but, once a year, I pretend he's right.